Year 3 have been working hard at home with some great History outcomes! #HPAB @HarrisFed https://t.co/17RH4mCbEP

Some poetry today based on a short film https://t.co/cy7fiwC1n5

Here is a great idea from one of our pupils - keep a diary and use those literacy skills everyday! Well done! @HarrisFed #HPAB https://t.co/B611mZIeVj

Twitter WallHarris Academies
All Academies in our Federation aim to transform the lives of the students they serve by bringing about rapid improvement in examination results, personal development and aspiration.

Science Week is a big hit with Year 6 parents

Explosions, paper planes and original board games were just a few of the highlights of an eventful National Science Week for Year 6's Maple Class.

Our lessons focused on experiments and investigations around the theme of 'journeys'.

It was midweek when the school opened its gates - during school hours - to eager parents who wanted to enjoy the scientific discoveries alongside their children.

One parent said: "It's really impressive to see that they're all engaged, they clearly enjoy science - it's been a fun lesson."

The task at hand was to use background information and research about the Channel Tunnel, which connects the English coast with France, and create a board game featuring the tunnel's success and challenges.

The extension set to the whole class was to incorporate facts and figures about the Channel Tunnel's history within their game.

Groups had 100 Square grids at their disposal, as well as dice, player counters and additional coloured paper to bring their ideas to life.

There was certainly evidence of pupils utilising stop signs to miss a go or drawing tracks on their grid so that were someone to land on the track, they would have to follow its course back down the grid - similar to a snakes and ladders style of game.

Another parent remarked: "It's been so nice to actually see them in school and observe what it is they're doing. The teacher involved everyone in the class and all of them looked liked they were enjoying themselves."

It was an amazing week enjoyed by all! 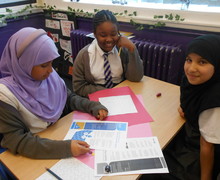